Special Offer!!
Order this item and we will include a $10.00 Credit good towards any future purchase!

Please Note:  We do not charge your credit card for Pre Orders or Back Orders until the item is in stock and ready to ship to you

This is one of the few original 1965 GT 350 “R” models ever produced by Shelby American. The GT350R was the first time an American manufacturer offered a strictly-for-racing competition model which could be purchased from a dealer and which would require nothing after delivery. These cars could literally be delivered directly to the track and raced the way they came off the transport. This particular “R” model was 1 of 2 sponsored by Dockery Ford of Morristown, N.J. for the 1966 season. The Dockery dealership was very involved in racing and wanted a big name driver for their car. So why not go for gold and hire Mark Donahue? Mark entered Dockery’s GT350R in nine races during the 1966 season and notched four victories! 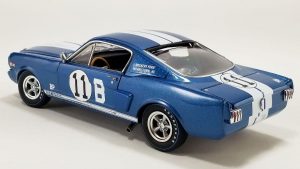 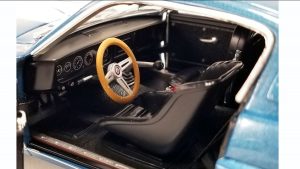 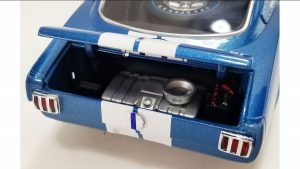